AP&S International GmbH is one of the donors of the new endowed professorship “Collaborative Robotics” at the Offenburg University. 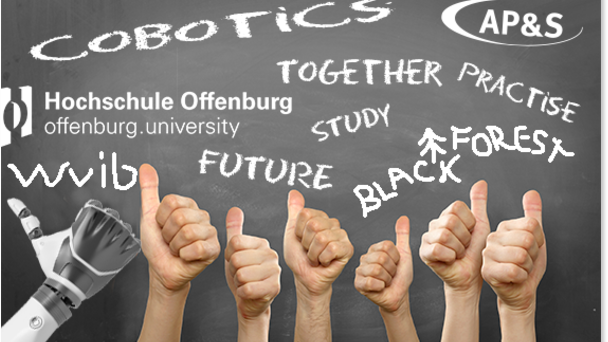 The Offenburg University receives a new endowed professorship, called "Cobotics and socio-technological systems”, which is donated by the member companies of the wvib Black Forest AG association.

“With the endowed professorship, the university and wvib respond to the steadily increasing demands of digitalization and the rapidly changing performance requirements on engineers. It doesn’t only strengthen the digitization strategy of the University in research and teaching, but also makes a long-term investment in the competitiveness of small and medium-sized industrial companies in the southwest Germany”, says Rector of the University Prof. Dr. Dr. Winfried Lieber.

"The reaction within the wvib Black Forest AG to the idea of financing an endowed professorship "Cobotics" was consistently positive. In the shortest time, many supporters among its members have been found, who wanted to participate. This shows the high demand for trained specialists in this area", explains wvib CEO Dr. Ing. Christoph Münzer at the press conference.

AP&S International GmbH from Donaueschingen is a donor of the endowed professorship too. CEO of the company Alexandra Laufer-Müller, a wvib member for many years and in the wvib advisory board since November 2017, says: "Cobotics is an absolutely trend-setting technology branch, that opens up new perspectives for companies. To promote this trend in our region in time, to establish efficient interfaces between theory and practice and to secure junior staff in this area of competence, is clearly a part of our corporate responsibility.”

The professorship "Collaborative Robotics" is endowed with a total of 1.2 million euros, which has so far been provided by 13 member companies of the wvib and the "Gisela and Erwin Sick Foundation". In addition to the professor position, the foundation also includes the position of an academic employee. The funding period is five years, after which the university will take over the professorship as a permanent post.

"The endowed professorship belongs to the Faculty of Mechanical Engineering and Process Engineering. It is designed in such an interdisciplinary way, that it takes up the existing competences of all faculties in order to create sustainable and value-adding solutions ", emphasizes Gerhard Kachel, Vice Rector of the Offenburg University for Technology and Knowledge transfer. "We want to ensure that, in addition to the concrete research and transfer projects with the companies in the region, knowledge transfer into teaching and training is guaranteed."

"We considered for a long time about the question, which university in our region is the right one for the endowed professorship "Cobotics". The technical orientation of the Offenburg University provides the optimal precondition for the promotion, which will contribute to the competitiveness in the Ortenau region and far beyond that", says wvib President Burger.

The association wvib, that is located in Freiburg, was founded in 1946 and counts more than 1,000 manufacturing companies as members, which employ 224,000 people and generate 52 billion euros in sales. Offenburg University started in 1964 as a state engineering school. Today more than 4,500 young people study technology, business and media at the two locations in Offenburg and Gengenbach.