Do you know that the history of AP&S goes back to 1995 and started in a small tractor barn in Donaueschingen-Aasen? Surprising, isn't it? Find out more exciting facts here in the interview with Horst Hall, founder and chairman of AP&S. Venturesome, innovative and extremely exciting. 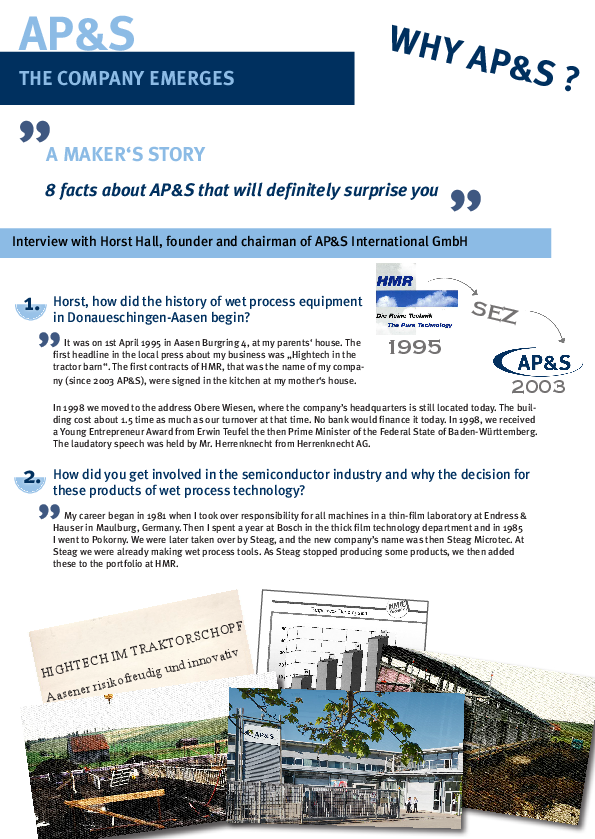 Horst, how did the history of wet process equipment in Donaueschingen-Aasen begin?

Horst Hall: "It was on 1st April 1995 in Aasen Burgring 4, at my parents‘ house. The first headline in the local press about my business was „Hightech in the tractor barn“. The first contracts of HMR, that was the name of my company (since 2003 AP&S), were signed in the kitchen at my mother‘s house.In 1998 we moved to the address Obere Wiesen, where the company’s headquarters is still located today. The building cost about 1.5 time as much as our turnover at that time. No bank would finance it today. In 1998, we received a Young Entrepreneur Award from Erwin Teufel the then Prime Minister of the Federal State of Baden-Württemberg. The laudatory speech was held by Mr. Herrenknecht from Herrenknecht AG."

How did you get involved in the semiconductor industry and why the decision for the products of wet process technology?

Horst Hall: "My career began in 1981 when I took over responsibility for all machines in a thin-film laboratory at Endress & Hauser in Maulburg, Germany. Then I spent a year at Bosch in the thick film technology department and in 1985 I went to Pokorny. We were later taken over by Steag, and the new company’s name was then Steag Microtec. At Steag we were already making wet process systems. As Steag stopped producing some products, we then added these to the portfolio at HMR."

Can you remember your first order? Which wet process tool was it about?

Horst Hall: "The first wet process equipment was a small MWP for Micronas in Freiburg, the first AWP was in 1997 for Philips (today NXP) in Hamburg."